Looking for an unexpected art adventure? Street-art stalwarts like Bushwick, Brooklyn; Greensboro; and Miami are already on your radar, but for those in search of a new art adventure, here’s where to look — Jersey City. And don’t waste your time contextualizing Jersey City in regards to its proximity to NYC. Jersey City is an independent entity. Nowhere pulses with the energy that this place possesses right now. You can feel it in the paint. While graffiti has always thrived there, a recent influx of institutions like Mana Contemporary and the incoming Centre Pompidou has underscored the scene’s evolution and momentum. Here’s the best intel to guide your adventure to Jersey City.

It’s worth taking a quick drive off the beaten path to witness this bursting convergence between CRASH and Dallas-based JM Rizzi, who grew up on Staten Island and began writing graffiti as a teenager during the ’90s. Rizzi went on to study at the School of Visual Arts in Manhattan. He recalls that he began visiting Jersey City to see his classmates living in the school’s dorm building off the Pavonia stop of the PATH train. This one-of-a-kind mural is a colorful conversation between two artists who emerged from an authentic tri-state state of mind.

Mr. Mustart moved to Jersey City from Russia at 14. He’s been active in the city’s scene since, into his adulthood. The initial culture shock of this move lessened when he learned he wasn’t the only immigrant around. “My first friends in America were from Portugal, Brazil, Mexico,” the artist says. That open-mindedness sticks with him today, influencing his free-flowing abstract art style with graffiti elements like outlines, fills and highlights. “I feel a little bit more comfortable being myself,” Mustart says of creating in Jersey City. “A lot of people I know here don’t have any type of filters that they put on.” When I stopped to take this photo, a man came over and told me it’s the most unique mural in the whole city — no filter, just friendliness.

JC Hundreds Mural Co. has also curated an extensive array of public art throughout Jersey City. Rather than wading through bureaucracy, curator Wysme Santos has so far focused on painting neglected walls without permission, working in broad daylight while fostering an upbeat atmosphere. During the Jersey City Mural Festival, he used his connections at JCMAP to secure wall after wall for additional local artists. Santos recalls his experience as a young graffiti writer in the city. He says that he would go out to paint at 8 p.m. because the streets emptied early, and be home by 11 p.m. “I like the way it’s starting to be more openly accessible to the community that these things exist,” Santos says. “Back in the day, you had to be in the know.” Today’s upcoming talents have unprecedented opportunities to carry the torch, like this ever-shifting artist playground JC Hundreds has organized to celebrate art’s endless evolution.

Taiwanese painter Orange Li arrived in Jersey City three years ago by way of Bushwick. She first visited the city to check out a studio at Mana Contemporary and was shocked to find how quickly she could get across the Hudson River. At Mana, Li encountered all kinds of divine signs that it was the correct spot for her. Today she considers her adopted home an oasis, harboring a particular love for Liberty State Park on a sunny day. This quintessential Jersey City mural from 2014 welcomes everyone walking from the PATH train to Mana’s main campus, past the White Castle on JFK Ave. through Little India’s restaurants on the lively Newark Ave. drag. “Sunset Tiger” aligns with Li’s own practice, which uses archetypal animal energy to share messages more profound for articulation.

I met up with Chicago-based multimedia creator CzrPrz off the Grove St. stop on the PATH train a few months back. Most summer nights, this restaurant- and bar-lined pedestrian thoroughfare turns into an open-air party replete with festival lights and clinking drinks. Perez has visited Jersey City on several occasions, staying with artists he knows who’ve been based in the city. He understands from observing his own arts community that engaging with every city on its own terms proves the best way to grow a scene intentionally, mindfully and ethically. We enjoyed the unique, tasty drinks at Pet Shop before wandering into this art alley to shoot. 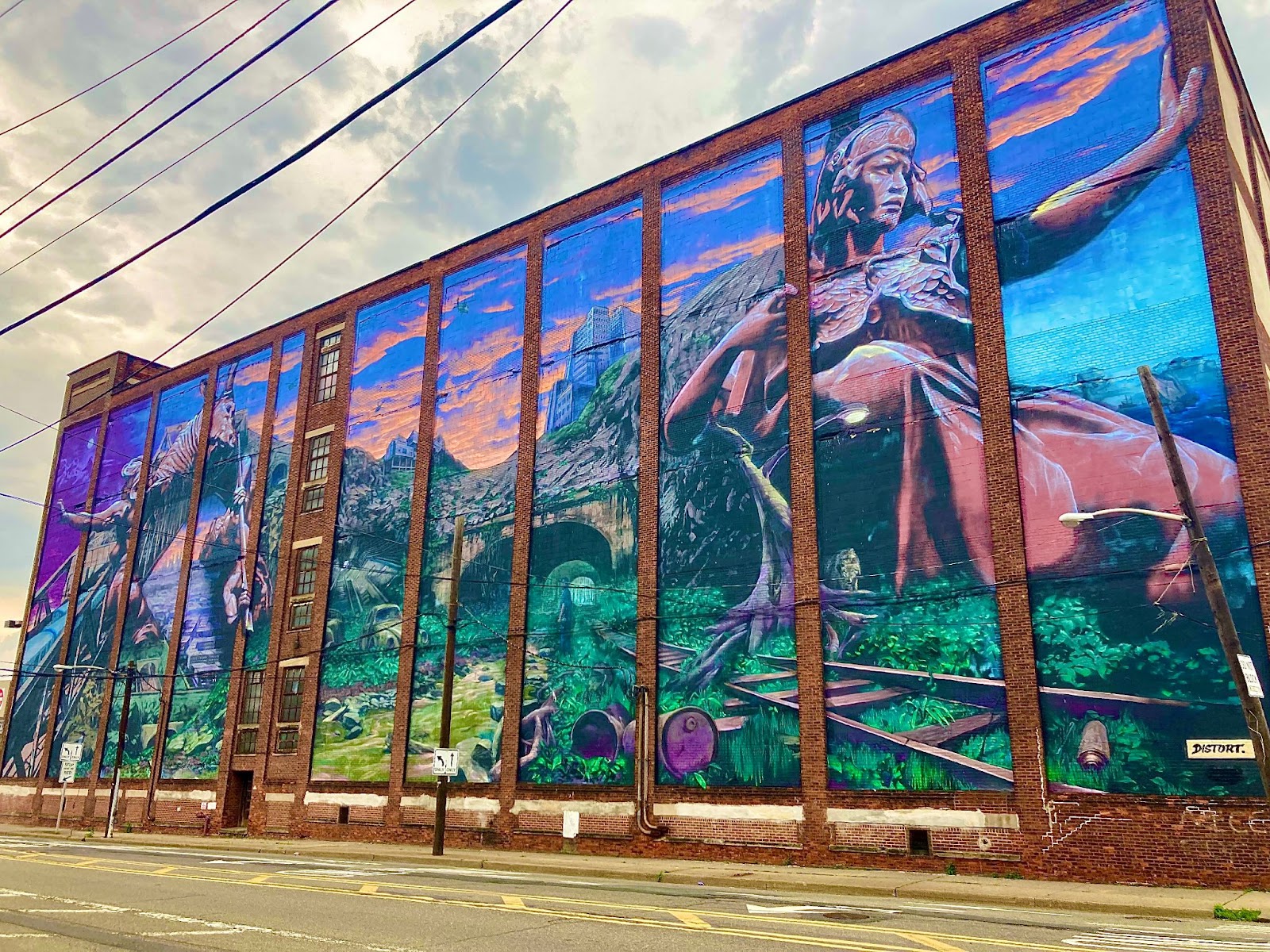 DISTORT has been writing utterly arresting graffiti since his Jersey City adolescence. He later spent time in Philadelphia, where he earned his BFA from the University of Pennsylvania and a Certificate in Painting from the Pennsylvania Academy of Fine Arts. Today, Jersey City is his home. He paints all over the city and shares experimental works with gallery exhibitions. Of all his murals in Northern New Jersey, this colossal creation near the Holland Tunnel is his favorite. Rendered in the artist’s standalone style of classicism enlivened by electric hues, this can’t-miss mural is one of the largest works of art completed by a single artist in the state.

Deep Space Gallery is a necessary stop on any art trip to Jersey City. What looks like an unassuming building on a side street quickly opens into an expansive, winding funhouse filled with treasures. Deep Space was founded five years back by Dutch and Jenna, two creatives committed to fostering an arts incubator and launchpad for professionals who pop into their orbit. The gallery takes risks with their programming — pop-up markets for local makers, comedy shows with world-class talent and art exhibitions that challenge the notion of medium. “I like different genres weaving together so it feels like this integrated whole of creative living, honoring peoples’ ideas and seeing where they go,” Jenna tells me. Jenna and Dutch’s must-see recommendation for visitors to the city is this collaborative effort by the city’s preeminent graffiti gang, AIDS Crew.

Brooklyn-based Jason Naylor completed his unmissable first mural in Jersey City for the Jersey City Mural Festival. Two Technicolor hands reach for the moon in this psychedelic Renaissance artwork. “Together we can accomplish anything,” Naylor explains. “The idea for the piece is, if working together can accomplish as much as handing someone the moon, then working together we could also create unity and celebrate diversity.” Naylor cruised by on his motorcycle to scope out the wall he’d be painting. “I realized that I was gonna be painting across the street from this massive Shepard Fairey piece,” he recalls. Painting in the shadow of a legend became painting alongside his heroes as the festival commenced, including Ron English and Maya Hayuk. You can also find Naylor’s artwork on the festival’s official beer: Rise and Shine by Ghost Hawk Brewing Company in Clifton, N.J.

Just steps from the Jersey City Mural Fest hot spot at Monmouth St. and 13th St, you’ll find wall after wall of incredible artwork underneath the bridges of the surrounding industrial area. You may also see a chain link gate, sometimes left open. Enter at your risk — it’s technically trespassing, and by no means safe. But, just beyond the opening, colorful graffiti burners and tags snake around load-bearing beams while wider facades feature full pieces. Here, it’s easy to believe that Jersey City is in the land itself, something even more than the incredible artistic legacy woven throughout its food scene, its cultural institutions and its storied history.

The Best Cities in America for Street Art